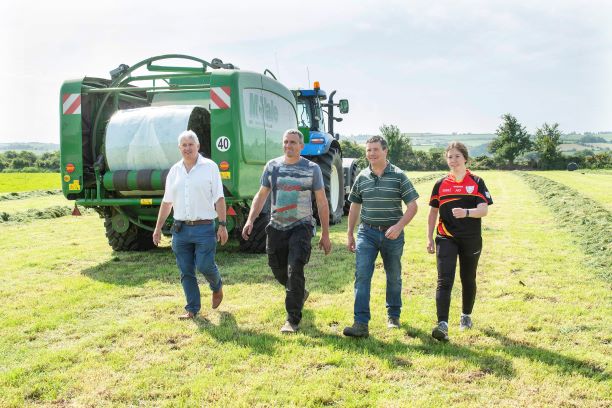 According to DAFM data dairy cow numbers as of1 March were up by 5%.

Surprisingly the number of beef calves registered as 1 May has also increased by 3.3 %.

Calf exports from the Republic of Ireland up to the week ending May 5 to other EU destinations are well behind 2019 levels, according to the Dept of Agriculture.

So we will need a lot more silage available for feeding to livestock next winter and spring.

Making extra silage is not an option on many farmers and it is an unwelcome extra expense.

However, one solution is to minimise storage loses for baled silage conserved.

Jerome Desmond, his wife Majella and their son Brian operate a dairy farm at Garryhesta, Ovens in Co. Cork.

This is a family farm where son Tom and daughter Aisling also help out at weekends and during holiday time.

Brian aged 21 years was educated at Clonakilty Agricultural College and also worked on a large dairy farm for six months in New Zealand.

Milk from their mixed herd of 130 Holstein Friesian and Jersey x cows is supplied to Dairygold Co-op.

The average yield for this spring calving herd is 6,500 litres (over 1.400 gals) and milk is produced mainly from top quality grazed grass.

This farm is on dry land and they budget for a three-month winter but make plenty silage to cover for the possibility of an early winter, late spring or summer droughts.

They make 70 acres of first cut clamp silage and 40-50 acres of a second cut. Around 450 bales of silage are also made by their local baled silage contractors Aidan Deasy and his son Jim.

Aidan and Jim operate two McHale Fusion3 Plus balewrappers and they give their customers a choice of using netwrap or Baletite.

They own Aherla Farm &Plant Hire and do silage work for around 50 local farmers.

According to Aidan, 90% of their customers have now switched from netwrap to Baletite.

Jim says that this is “because the silage preserves better, bales are easier to handle and less subject to damage when they are moved.”

“They give us a very good service, “says Brian. Baletite costs €1 more per bale and is referred to as balewrap by farmers and their contractors.

The Desmonds have been using Baletite now for two years and are very satisfied with the silage quality.

According to Jerome “we have 100% perfect preservation whereas with the netwrap there was some wastage around the outside of the bale.

Another plus is that it can be disposed of along with the wrap.”

“it is an innovative pre-orientated film that replaces netwrap in round silage bales.

It is specifically designed to enhance the ensiling process and protect the bale contents.”

Lloyd Dawson, Commercial Director Silage with Berry bpi agriculture the manufacturers of Baletite says that “being a film,

Baletite provides an additional air barrier whilst helping to retain a better bale shape by exerting a tighter grip around the bale circumference.

Plus, it reduces wastage of valuable silage wrap, as, unlike netwrap, no baled fodder can become enmeshed in it.”

Its production from the same base material as balewrap means users don’t have to separate the Baletite from balewrap after use.

Instead, both Baletite and the accompanying balewrap can be recycled together thereby saving valuable time and labour costs.

to the increased oxygen barrier afforded by the extra film layers around the bale circumference.

Its ability to cover the bale from edge to edge offers additional protection around the edge of the bale – especially useful when baling stalky crops.

Baletite exerts a tight grip around the bale circumference to compress content and expel oxygen faster.

Due to the high tightening force, Baletite creates tighter, more compact bales that benefit from a more rounded shape.

. The RPC bpi agriculture group employs over 2,000 people, has a turnover of over £700 M and operations in 23 countries.

It is Europe’s largest polythene recycler and processes over 120,000 tonnes pa.

This covers LDPE and HDPE recycling and can be grouped into industrial, packaging and agricultural waste.