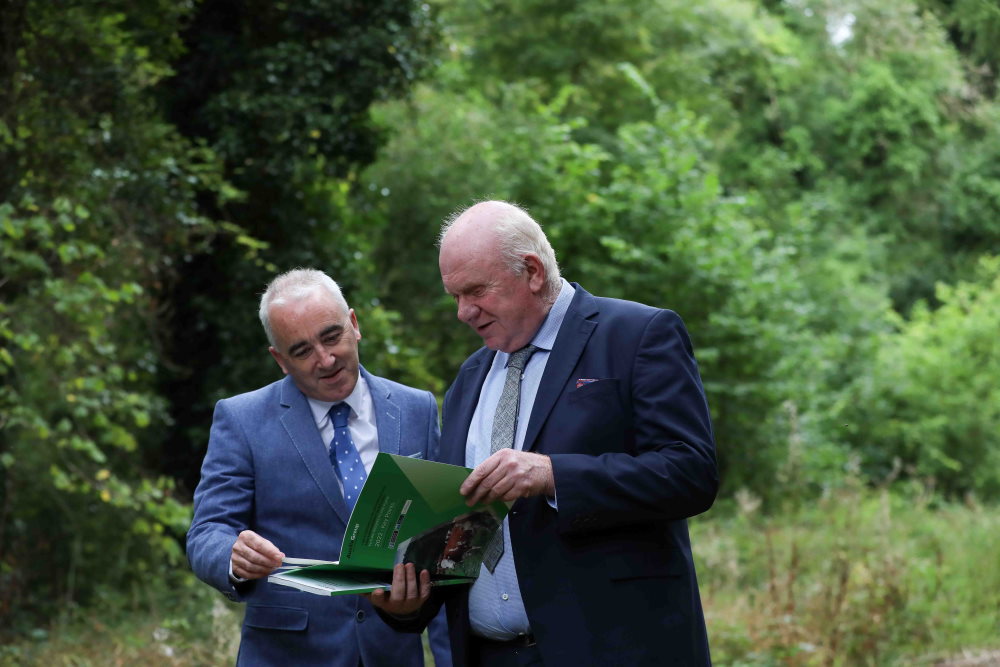 A major report, “The Economics of Afforestation and Management in Ireland: Future Prospects and Plans” commissioned by AuxiliaGroup and compiled by Professor Cathal O’Donoghue, the established Chair of Social and Public Policy at the University of Galway has been published today at a 10 am media function in Buswells Hotel, Dublin. His well-researched report has highlighted the opportunities and challenges of delivering national forestry goals to deliver carbon neutrality by 2050.

Although the national afforestation policy has been a success over the past century, planting 690,000 hectares (11% of the land area) there has been a substantial decline recently with only about 2,000 hectares planted in 2021 which is only 8% of peak planting in 1995.

The national Climate Action Plan, that sets a roadmap to reach net zero emissions no later than 2050, identifies afforestation as the single largest land-based climate change mitigation measure available to Ireland. The area of new forestry required to achieve carbon neutrality by 2050 is 18,000 hectares per annum. The Climate Action Plan sets a target of 8,000 hectares per annum, which is actually 10,000 hectares below what is required. Ireland is currently missing the required planting by 16,000 hectares per year. The cost in terms of the State carbon price of missing afforestation targets by 6,000 hectares is more than €400m at a €100 carbon price per ton over a 40-year forest rotation and €1bn relative to what is needed.

According to Professor O’Donoghue “the more we fall short of the afforestation target the greater will be the need to deliver CO2 reductions from other sources including agriculture unless there was a major reduction in animal numbers with consequential economic impacts.”

The report highlights beef and dairy targets of Food Harvest 2020 were met early, but the forestry target was never achieved, with only once in 2010 was even 50% of forestry target met. The study finds that if the afforestation target had been met, it would have allowed for carbon neutral dairy expansion.

Given the existing fall off in afforestation levels over the past two decades, the forest estate will move from being a carbon sink to a carbon source. However, the more we can plant in the immediate term, the less deep the impact will be. Delaying planting decisions as a result has a major impact on the capacity to reach carbon neutrality by 2050.

The report highlights the opportunity to enhance the financial incentives for afforestation and to overcome some of the challenges in relation to replanting. It provides a comprehensive economic and cost benefit analysis of such incentives. The report also details the need for the development of a Forestry Development Agency and a review of the best department location for forestry in achieving national carbon neutrality goals. Professor Cathal O’Donoghue makes 14 key cost-effective recommendations which can help achieve the planting targets required for carbon neutrality.
Deputy Jackie Cahill , chair of the Joint Oireachtas Committee for agriculture, welcomed the initiative and the report. He stated that “any such recommendations that can restore confidence in forestry, including owners affected by Ash dieback, must be acted upon by the department, particularly given its significance in achieving national climate change mitigation targets”.

Jackie Cahill TD, chair of the Joint Oireachtas Committee for agriculture, pictured discussing a  major report, “The Economics of Afforestation and Management in Ireland: Future Prospects and Plans” commissioned by the AuxiliaGroup and compiled  by Professor Cathal O’Donoghue, Chair of Social and Public Policy at the University of Galway. Prior to this he was Head of the Teagasc Rural Economy and Development Programme .According to this report the Agri Sector needs forestry to reach Carbon Neutrality by 2050.