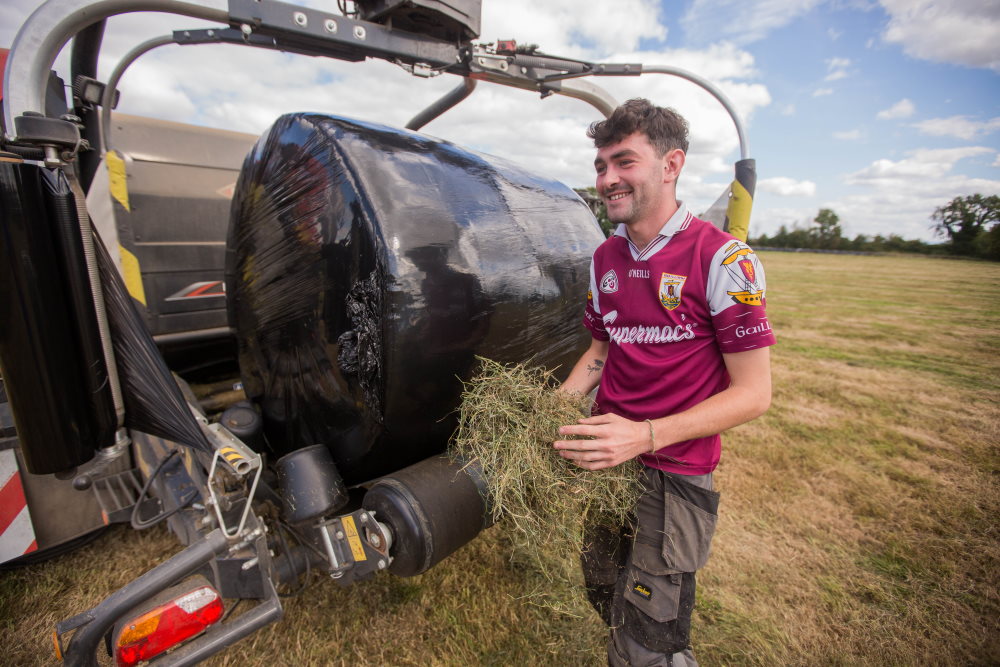 Irish farmers have been warned by Teagasc of the serious dangers to their health posed by mouldy bales and feed.

“Dust, spores and vapours from mouldy bales can cause very server respiratory illnesses” according to Dr. John McNamara, Teagasc Health & Safety Specialist who has warned that many farmers should be wearing masks when opening bales.

As regards animal heath the potential disease impact and reduced animal performance means the feeding of mouldy forage should be avoided at all costs as the majority of moulds produce mycotoxins.

These metabolites have a toxic effect on an animal’s metabolism.

At the very least, mycotoxins will reduce milk yields in cows and performance in beef animals, abortions and, in extreme cases, death.

However with the new Film & Film bale wrapping system mouldy silage is no longer a problem for livestock farmers and their valuable animals.

Declan Gilligan who is based near Eyrecourt in Co. Galway and his farm contracting business covers a large catchment area from Clarinbridge in co. Galway, Banagher and Tullamore in Offaly and into North Tipperary.

Declan does all the bulk fertilizer spreading for Liffey Mills, Banagher, Co. Offaly throughout the year.

His cousin Conor operates one of the biggest hi tech, bulk fertilizer spreaders in Ireland.

This is a Bredal 135 powered by a Claas 8430 Axion tractor (Can be seen working on YouTube.)

Other key members of his farm contracting team are Anthony & Mark.

According to Declan fertiliser usage is well down and this is impacting on grass growth & he expects a similar situation next year due to high fertiliser prices.

Declan is married to Sinead and also does baling & reseeding. He has been contracting for the past 21 years.

For baled silage we use Silotite1800 purchased from Andrew Smith, Manager of Liffey Mills in Banagher, Co. Offaly. “Liffey Mills give me a good service, competitive prices and top class products” says Declan.

According to Andrew “With its 1800m length, contractors get up to 20% more bales per reel, so less downtime to change reels.

Also the new Silotite1800 has an enhanced oxygen barrier and UV protection for bales, whatever the weather.”

Being lighter than the standard cardboard box, there is a reduction of almost 20kg in packaging material used on every pallet.

He leaves the grass tedding to the farmers and the bale transport.

However he will move bales for older farmers and those who do not have suitable equipment.

However many of his beef customers are retiring from farming and their land is now leased to dairy farmers.

According to Declan many dairy farmers take surplus grass out of production by making baled silage.

Declan says that “first cuts were heavy but second cuts are light.

The price of balewrap was well up this year but there were less bales/acre due to the dry weather so that helped reduce costs to his customers.”

Another problem for Declan was that his diesel costs have doubled this year.

Last year was the first year he used the film and film system using his Kuhn baler wrapper.

According to Kuhn the film consumption is reduced by 30% thanks to the unique patented KUHN TWIN-reel film binding system.

Film & Film (F&F) wrapping is an innovative dual wrapping method, which combines the use of balewrap and netwrap replacement film.

This results in better shaped and more compact bales which can better withstand handling.

According to Declan everybody who used the film & film system last year used it again this year because they had no problems with mouldy silage in dry bales or haylage.

In addition we had a lot of news customers for the film & film system.